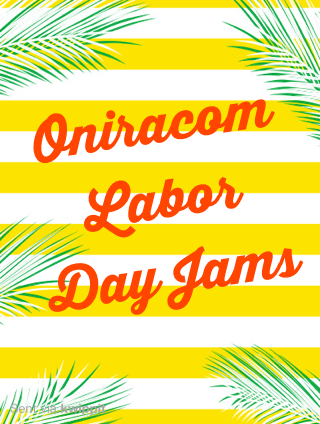 Barbecues, beach hangs, melted chapstick and dangerously hot steering wheels… don’t you love summer? But alas, Labor Day is today and summer is nearing its end. We asked everyone on the team to choose their favorite summer jam, or what they’ve been playing on repeat. Let’s just say, the result is as diverse as our team. Enjoy!

I Heard It Through The Grapevine by Marvin Gaye
Mick Mankowski

The Boys Of Summer by Don Henley
Energy for the summer! -Nathaniel Hanson

Atomic Bomb by William Onyeabor
My top summer track is in honor of the late great funk god William Onyeabor, who passed earlier this year. How does one not groove to this masterpiece? – Shahira Kudsi

Beach Break by Julietta
My go to song right now I’ve had on repeat is. It’s fun, upbeat and always makes me want to dance! I’m listening to it on my drives on Hwy 1 to the beach up in Northern CA and on my beach runs! -Miranda Koenig

I Got Your Message by Hideout
Great summer jam I’ve been bumping all summer. Whenever I need a boost, this sweet little diddy is always my go to. – Davis Regan

Animals by Ghost of A Saber Tooth Tiger
This collaboration between Sean Lennon and girlfriend, musician/model Charlotte Kemp Muhl exemplifies a multi-layered nod to the past masters while rooting in the post-po-mo sensibilities of textured elecro-psych-rock. In other words, it’s John Lennon’s son and his girl making fucking good music. -Jacob Tell

August Day Song by Bebel Gilberto
It’s a gorgeous song, takes me away from what I’m doing. It’s very wistful and perfect for the feeling of summer during into fall. -Mike Wald

Dub in Faluja by Mahom
Because there is dub all over the world, even in Feluja.  -Luke Archer

Rainbow in the Dark by Dio
-It’s actually a positive song, look up the lyrics! -Will Mankowski

Barbeque by ALO
The song pretty much speaks for itself.  It puts a deep but uplifting metaphorical spin on the act of barbecuing. -Sean Campos

Somewhere Over the Rainbow by Israel Kamakawiwo’ole
-Mick Mankowski

Don’t Worry Baby by The Beach Boys
In my dreams, young Brian Wilson and I are wearing matching blue and white striped shirts, singing a duet at Hendry’s Beach. -Shahira Kudsi